WATCH: How To Integrate Muay Thai Into Your MMA Game (Videos) 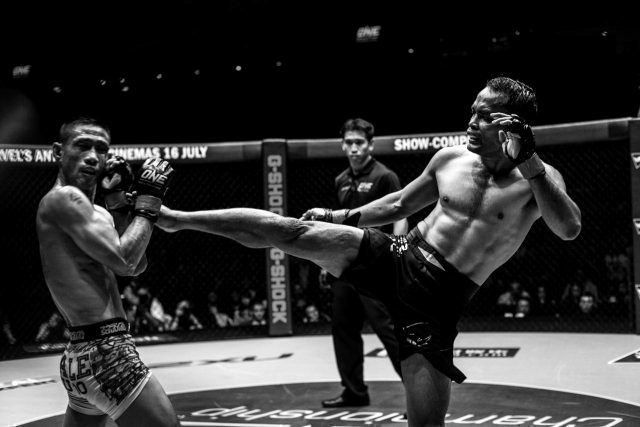 Muay Thai utilizes a beautiful symphony of kicks, punches, knees, and elbows with fluidity and grace, truly embodying “the art of eight limbs”. It is because of all these weapons that many MMA fans consider Muay Thai to be the king of striking arts.

It has been argued that most Muay Thai utilized in MMA is not actually Muay Thai – it is K-1 style kickboxing. Although both striking arts are similar, kickboxing utilizes only punches and kicks while Muay Thai uses punches, kicks, knees, elbows and the full clinch. Most MMA fighters (with the exception of Muay Thai World Champions such as Joanna Jedrzejczyk and Dejdamrong Sor Amnuaysirichoke) who specialize in striking, use a combination of both Muay Thai and Kickboxing in their MMA game.

The Differences Between Muay Thai and MMA:

If you haven’t experienced it for yourself, pure, traditional Muay Thai cannot be utilized in MMA. A nak muay cannot simply walk into the cage without any MMA training and expect his Muay Thai to be effective against his opponent. However, with a few adjustments to one’s stance, timing, range, and of course, extensive grappling training, a Muay Thai fighter could certainly do well inside the MMA cage.

The traditional Muay Thai stance requires a nak muay to place most of his weight on the rear foot, which remains flat or slightly raised, depending on one’s instructor. A small percentage of his weight is placed on the ball of the front foot, and the length and width of the stance are about even. Because all the weight is placed on the rear leg, the front leg is always light, making it easier for him to block kicks and throw push kicks. Also, Muay Thai fighters usually stand up tall, turning slightly sideways to the front. Unfortunately, in MMA, this makes one very vulnerable to takedowns.

In MMA, one’s weight is equally distributed on both legs, with both feet set at a wide angle, facing right. This stance allows great mobility, making it easy to shoot for a takedown or land brutal punches.

If you’ve ever watched a traditional Muay Thai fight, you would know that it goes at a much slower pace compared to an MMA fight. The first two rounds of a Muay Thai fight consists of the two fighters feeling each other out whereas the first two rounds of an MMA fight are quite unpredictable. Most MMA fights (unless they are title fights), only last 3 rounds, so most fighters go all out as soon as they touch gloves.

For a Muay Thai fighter making the move to MMA, there are more weapons to anticipate apart from the 8 limbs he/she is used to. There are takedowns from grapplers to varying striking styles from practitioners from different striking arts, it is a different ball game to fighting another traditional Muay Thai fighter.

In a Muay Thai fight, fighters will either walk forward to engage or exchange strikes. They will often stay within striking range, blocking attacks, countering and attacking, waiting to find the right moment to land that knockout blow. For a Muay Thai fighter to transition to MMA, he must be willing to deal with his opponent moving all over the place. Depending on the type of MMA fighter he is, your opponent will either attack quickly or move forward then back away or shoot for a takedown. There is also having to deal with fighting against the cage.

The emphasis of beautiful technique is apparent in Muay Thai. It will appear as if both fighters are putting on a show, showcasing their techniques and attributes. In a Muay Thai fight, the way the nak muay moves depends on the type of fighter he is. If he is a muay mat, he will move forward and pressure his opponent. The muay femur will wait for his opponent to attack before making a move and defend attacks by checking kicks or blocking and countering with a devastating strike.

As we previously mentioned, defense in Muay Thai consists of checking kicks and blocking attacks with maintaining a high guard or parrying. There is also the lean back defense, which is used to defend against kicks and punches. Although these could be utilized in MMA, one must be always wary of any takedown attempts, especially when checking or blocking kicks since you are balancing on one leg. Many grapplers will also attempt to use a takedown to defend against strikes, so one would need to watch out for that as well.

When throwing a strike in a Muay Thai, a nak muay always uses maximum power and fully rotates his hips. The force and power of a strike comes from this hip rotation, but unfortunately, this is very dangerous in MMA. There are many risks with fully rotating the hips, especially the risk of getting taken down because you could fall off-balance if you over commit to a strike.

As you can see, not all Muay Thai techniques translate perfectly into the MMA cage. However, a Muay Thai fighter would have a distinct advantage in the utilization of certain weapons in an MMA fight. After all, it is only a Muay Thai fighter who has mastered the use of these deadly strikes.

The Muay Thai fighter has a distinct advantage in the utilization of elbows. In Muay Thai, a nak muay throws elbows from many different positions, directions, and combinations that could certainly catch an MMA fighter off guard. Whether it is thrown in the clinch or in a combination, a nak muay is certainly well versed with the elbow. In MMA, fighters usually only throw elbows during ground and pound and occasionally in the clinch. Muay Thai fighters are extremely versatile in their use of elbows, and likely to throw them in ways and at times MMA fighters are not used to, thus giving them an advantage.

One of the deadliest weapons of any Muay Thai fighter, a powerful knee has the capability to knockout one’s opponent with a single blow. In fact, certain fighters such as multiple-time Muay Thai World Champion Petchboonchu FA Group and Dieselnoi are feared for their knee strikes. They are able to launch deadly knees from both the clinch and from a distance, devastating their opponents. Thus, the knee strikes of a Muay Thai fighter would certainly fare well in the MMA cage, especially against an opponent who has not trained or used them to the extent that a nak muay has.

In an MMA fight, you’ll see many fighters use low kicks to destroy their opponent’s lead leg and distract them to land other blows. If they are more experienced strikers, they’ll attempt to use head kicks to knock out their opponent, utilizing a Thai roundhouse kick. They will also use the roundhouse kick to attack the body. There’s no doubt that Muay Thai fighters would have the upper hand in this aspect. However, a Muay Thai fighter would need to be wary of takedowns since they put weight on only one leg, or the pivoting/standing leg.

The clinch in MMA is most frequently used to take down an opponent, especially if the fighter utilizing it is a grappler. Anderson Silva is known for his use of the clinch to control his opponents and land nasty knees and elbows to the body and head. This is similar to the Muay Thai clinch or the plum. Muay Thai fighters are used to fighting inside the clinch and pummeling for control. They can also use the clinch to sweep their opponent or land strikes.

There’s no doubt that Muay Thai is one of the best striking arts for MMA. And being a master at it certainly brings you a distinct advantage. The transition to MMA however, requires adapting your Muay Thai techniques to the MMA cage, as seen in the tips above.