You can have the hands of Muhammad Ali and the low kicks of Ernesto Hoost. Throw in the roundhouse technique of Yodsanklai Fairtex and the flashy brilliance of Samart Payakaroon to boot. To make things even more impressive, add the speed of Vasyl Lomachenko and the defensive aptitude of Floyd Mayweather Jr. The perfect fighter in MMA?

Not even close. Without a ground game and understanding how to protect yourself from the deep waters, you are in serious trouble. Even if you manage to put together a winning streak at some point, just around the corner there will be a wrestler or ground expert looking to steal your soul.

In MMA, nothing hurts quite like being rag-dolled and taken down with ease by your opponent. It can often be embarrassing and nothing short of a sobering exercise in humility. With no escape and at the absolute behest of the ground assassin, being in a position where you are subject to the ground and pound of the other fighter—or several submission attempts—can have you questioning if the sport is right for you at all.

Well, either that or if you need to go back to the drawing board and work on your takedown defense.

If that is the case, you can do worse than to check out these five basic tips for countering a takedown in MMA.

When faced with a solid grappler, you need to be aware of the dangers that can come from their attacks and the consequences of your own.

In other words, you can succumb to a single or double leg takedown while on the back foot or also run the risk of being taken to the floor in a failed attack. Should you overextend and put too much power into a shot and miss, for example, you will be in a position of vulnerability that a smart wrestler can use to their advantage. This is not where you want to be.

Perhaps the most basic, yet effective way of defending single and double leg takedowns is by sprawling. When your opponent goes for the takedown, by pushing down on his head, neck, or shoulders while simultaneously dropping your hips and legs down behind you, you can prevent the attacker from grasping hold of you.

More than being just a defensive method, sprawling can also provide you with a means of setting up attacks. You can potentially take your opponent’s back, for example, if you time your sprawls correctly.

Provided you have the timing right, a knee can pretty much end the contest then and there when an opponent shoots for the takedown. At the very least, the sheer threat of a knee to the face can make even the most persistent wrestler wary of shooting for a single or double leg. Of course, getting the timing incorrect can do half of your opponent’s job for him, landing you on your back.

Given that the opponent has to lower his body weight and center of gravity to generate the power to shoot for a takedown, there is a lot to be said for working on using defensive knees when battling seasoned wrestlers. You can cause a lot of damage to a fighter who shoots carelessly. Just be careful with your timing, posture, and technique.

3) Don’t Be A Sitting Target 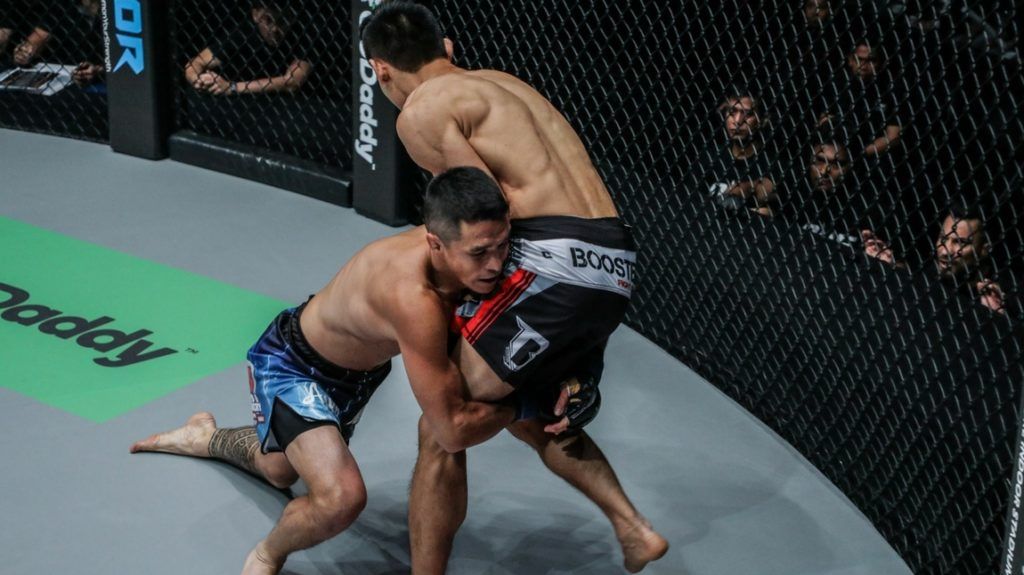 As simplistic as it sounds, evasiveness, lateral movement, and good footwork can go a long way toward avoiding takedowns. To be in a position to shoot for a takedown, the attacker must be within range to do so. By circling and being smart with your movement, you will invariably make it harder for your opponent to find the right range to shoot from.

Likewise, as you cannot simply run away from your opponent, you will need to ensure that you are scoring, too, but it is important that you do not remain flat-footed while throwing shots. Too many low kicks or swings will leave you unbalanced and in danger of opening yourself up to a takedown.

By making it more difficult for your opponent to take you down, you can also push him into making mistakes. Remember that they will need to set up to shoot for a takedown, and this can give you an opportunity to pounce.

Another popular way to defend against takedowns is to implement chokes. For example, the most commonly used choke would be a guillotine, but there are a number of alternative chokes that can also be used to gain the upper hand. If done right, this can certainly lead to the end of a fight. As an opponent leaves his neck open when shooting, if you are fast enough and have the right technique, you can make him pay.

What you need to keep in mind when using chokes as a means of defending takedowns is that they should never always be your first option. When fighting a prolific grappler, there is every reason to believe that he might recognize a pattern in your takedown defense and look to use this against you. As such, you might end up on the wrong end of a choke yourself if you don’t fight smart.

5) What About When You Are Against the Cage?

When you have your back up against the cage, you may lose your composure, but if you remain calm and use the cage as another leg, you can prevent your opponent from taking you down while forcing them to work hard on taking you down on a single leg. The more they work, the more energy they waste, meaning that if you have your balance and technique right you can use this to your advantage.

In a situation where you want to keep the fight on the feet, this technique can be very useful if you understand that the right balance and posture are crucial to using the cage to stay on your feet. That’s what it’s really all about—staying on your feet.