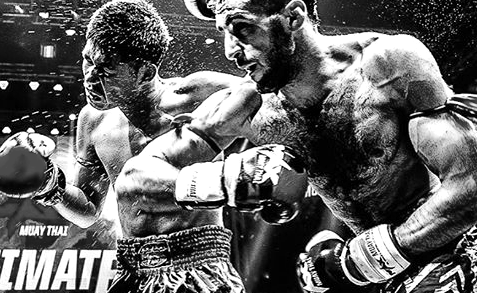 One of deadliest weapons in one’s Muay Thai arsenal, the elbow, when used correctly, has the power to seriously injure or knockout one’s opponent. To understand just how dangerous the elbow is, touch the tip of your elbow (the knuckle). When thrown with the right amount of force, there’s no doubt that the hardness of the elbow will be intensified.

Many fighters use the elbow to finish fights, capitalizing on a cut on the forehead of an opponent and using the elbow to cause more damage to the cut. The bleeding from the cut impairs vision and undoubtedly affects performance as well, which could lead to a fast finish. Unlike the other weapons, the elbow can only be thrown in close range.

There are 7 different ways to use the elbow: horizontally, diagonal upwards, diagonal downwards, uppercut, downward, backward spinning, and flying. As you can see, the elbow can be thrown in any direction, but different elbows have different applications and impacts. Today, Evolve Vacation shares the 7 Kinds Of Elbows In Muay Thai:

This move is also known as the rotating elbow or hitting down elbow. It targets the forehead, nasal bone and eyebrows as you aim your elbow upward while swinging the elbow diagonally downward in a 45-degree angle. It is a commonly used elbow in fights because it can be delivered behind the opponent’s guard.

Execution: From your fight stance, raise one elbow sideways until its tip aims upward. Keep your other hand up above the jaw to block any strikes and distribute your weight to both legs. As you throw the elbow, your upper body and hips should move along with it. Quickly return to fighting stance when you’ve finished.

This technique is also known as the side elbow. It targets the jaw, temples, and nasal bone. Similar to the slashing elbow, the only difference is that you must swing the elbow horizontally, parallel to the ground. To work on your horizontal elbow, practice on a heavy bag to get used to the movement. As you throw the elbow, twist your heel, hip and shoulder at the same time to add more force into the strike. This elbow is often used in the clinch when the opponent has dropped his guard.

Execution: From your fight stance, bring one arm to shoulder level. Keep your other hand close to your face, above your jaw as a guard. Move your arm horizontally, at 90 degrees with your hand at 30 degrees from your elbow. Your elbow must be parallel to the floor the entire time, even when you swing it.

Because this elbow targets the chin and nose, the elbow is swung diagonally upwards. You can perform this elbow at a 45-degree angle as well, which makes you less susceptible to counter attacks. However, traditionally, it is carried out in a straight line.

Execution: From your fight stance, slightly lower one of your elbows. While doing this, shift your weight to the leg on the active side and slightly bend it. Keep your guard up by putting your fist above the jaw for protection. Cup your fist on your ear and drive your elbow diagonally upwards. To generate more power, turn your hips and foot along the same direction of your uppercut elbow.

FIGHT BREAKDOWN: Up Elbow KO! The up elbow has the dangerous ability to penetrate an opponent’s guard. When landed accurately, it often results in a cut or a knockout. In this video, the most decorated Muay Thai World Champion in history, Petchboonchu F.A. Group, demonstrates how to execute this brutally effective technique! (VIDEO)

If you’re looking to completely devastate your opponent and cut him/her, the spear elbow is the best strike to use. Quick and sharp, this elbow is known to end fights, especially if it lands clean on your opponent’s head. This elbow targets the nasal bone, forehead, eyes, and collarbone and is great to use inside the clinch because of its quickness and small range of motion.

Execution: From your fight stance, raise one hand past your ear. Throw the elbow from above at a 45-degree angle as you raise your upper body and shift your weight down towards your opponent. Hit your opponent with the sharp tip of your elbow, also called the knuckle of your elbow.

Often times, if a rotating or side elbow misses its target, a reverse elbow is used right after. This elbow targets the jaw, solar plexus, and stomach.

Execution: Lower your lead arm so that your elbow is aiming at the opponent. To throw the reverse elbow, start from a low point. At this point you should be stretching your body in the direction of your opponent, which will raise your rear foot. While doing this, you should shift your weight to the front.

One of the deadliest elbows, the spinning elbow has the potential to quickly knockout one’s opponent. It requires immense technical skill and timing, and could be quite difficult to execute because your body must be turned around in order to throw it.

To read more about the spinning elbow, check out our article.

Execution: Step your left foot on the outside of your opponent’s left foot. Torque your right elbow backwards across your body as you whip your hips clockwise until your elbow points forward. If you are a southpaw, you should rotate your hips counter-clockwise. Your body should be completely twisted around, with your torso facing your opponent. Your elbow should end up 180 degrees from the original position.

The energy generated by your rotation should be enough to land a devastating elbow with your rear arm. Quickly return to your stance after you’ve landed the elbow.

Similar to the spear elbow, the elbow from above is often thrown together with a jump. It can also be delivered to the head or the collarbone using both elbows. Although it is usually performed with the rear arm, the front arm can be used as well.

Execution: Shift your weight to your front leg. Raise your body upward and raise your rear arm all the way up. At the same time, turn the rear part of your body to the front and throw your elbow down to the target, using all your weight.

If you are planning to use the elbow, ensure that your fists are loose. Keeping them clenched will only make your arm muscles tense, and prevent you from executing the elbow with speed. Don’t forget to put all your weight into the elbow and shift your body towards your opponent as you throw it. Doing so would ensure that there is enough power in your elbow to KO your opponent. And, as with any shot you throw, stay balanced and don’t throw your whole body weight forward. If you miss, you will fall off balance, which will put you in a dangerous position to be countered.
Share Tweet React
Like Us On Facebook