WATCH: How To Use The Spinning Elbow In Muay Thai (Videos) 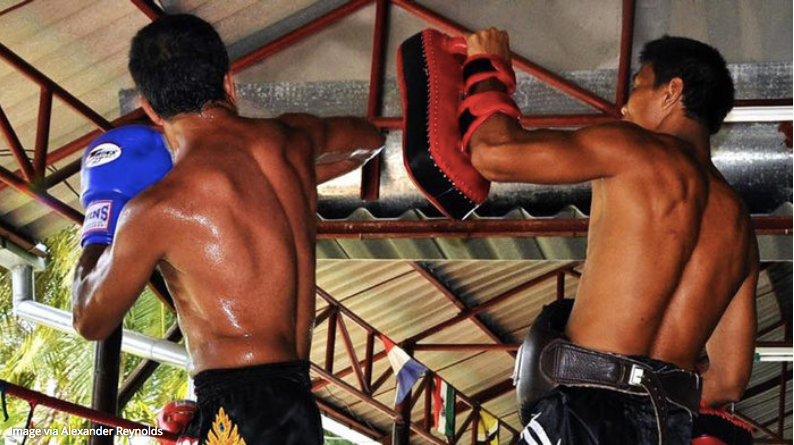 For many Muay Thai fans, the spinning back elbow, or in Thai, sok klap, is certainly a favorite. It is a technique that requires immense technical skill and timing and, if performed with enough force, has the power to inflict a devastating KO on its unfortunate recipient. What makes this technique especially unusual is that one’s body must be turned around in order to execute it.

This gives it an unconventional angle that could be difficult for your opponent to defend, if your timing and range are perfect. If you are willing to temporarily turn away from your opponent, a spinning back elbow could be the perfect technique to add to your arsenal. Even MMA fighters, including former UFC Light Heavyweight World Champion Jon Jones, are big fans of the spinning back elbow. In fact, Jones has been known to devastate his opponents with this deadly move.

Because of the difficulty of this technique, the spinning back elbow requires a perfect set up:

Setting up with a feint

When you set up with a feint, your opponent will undoubtedly try to counter your strikes, leaving him open for you to land your spinning back elbow.

As the last strike in a combination

As you know, it is important to keep your opponent guessing. You can start off with several simple combinations and eventually surprise him by using the spinning elbow as the last strike after a combination.

When your opponent is against the ropes

When your opponent is against the ropes, he has no place to move. As you step in and launch your strike, your opponent will bounce back, giving you the momentum you need to generate a stronger spinning elbow.

There are 2 kinds of spinning elbows:

When your opponent isn’t within clinch range, the horizontal/straight spinning elbow is a good attack to use. As you come forward and close the distance between yourself and your opponent, you can try to land the spinning elbow by setting it up with some strikes, using it as a counter after catching your opponent’s kick or after a feint.

Step your left foot on the outside of your opponent’s left foot. Torque your right elbow backwards across your body as you whip your hips clockwise until you elbow points forward. If you are a southpaw, you should rotate your hips counter-clockwise. Your body should be completely twisted around, with your torso facing your opponent. Your elbow should end up 180 degrees from the original position.

The energy generated by your rotation should be enough to land a devastating elbow with your rear arm. Quickly return to your stance after you’ve landed the elbow.

In this video, watch as Kem Sitsongpeenong throws a few jabs as a fake to cover his opponent’s vision and immediately step his left foot across and whip his hip around in a clockwise motion landing a clean horizontal spinning back elbow.

In this video, watch as Somrak lifts his left knee to fake a push kick and step his left foot outside of his opponent’s left foot and land a spinning back elbow.

In this video, Somrak throws the first left knee, on the second left knee he lifts up his left knee replicating a knee strike and steps over to his opponent’s lead foot and throws a horizontal spinning back elbow.

In this video, notice how multiple-time Muay Thai World Champion Nong-O Gaiyanghadao’s elbow is mostly parallel to the ground. His posture is also upright. The spinning elbow Nong-O executes in this video is useful when countering your opponent’s kick, using it to close the distance.

Setting up with other strikes

In this video, multiple-time Muay Thai World Champion Yoddecha Sityodtong sets up the spinning back elbow with several combinations. This will keep your opponent busy as he defends the combinations of attacks, ending with a spinning elbow surprise.

What makes it different from the horizontal spinning elbow is that your body must be tilted, with your head lower than your opponent’s and your elbow must come in at a raised angle at the same height as your head.

In this video, Somrak slips a left jab by bending his knees, lowering his head enough to slip the jab. Watch how he immediately steps his lead foot beside his opponent’s lead foot and launches a tilted spinning back elbow.

Observe how multiple-time Muay Thai World Champion Yoddecha Sityodtong sets up the tilted spinning back elbow. First, he fakes a push kick to lower his guard, convincing his opponent to move within range for him to strike with a tilted spinning elbow.

Although landing a spinning elbow during a fight might sound like a long shot at first, undoubtedly with enough practice, it is certainly doable. Like all techniques, you should practice first on a heavy bag or with your trainer on the pads. When you’re more confident, enlist the help of a partner and drill the technique until you’ve got it down perfectly. Remember, as with all advanced moves, you will need perfect timing and technical skill to be able to execute them during a fight. Good luck!
Share Tweet React
Like Us On Facebook