The Importance Of Running In Muay Thai When we look at established combat sports which require endurance in order to truly perform, road work plays an integral role in preparing fighters for battle.

Be it boxing or Muay Thai, our earliest introduction to training in combat sports is generally based upon conditioning. Running is, after all, the fundamental component of our conditioning as fighters. The majority of combat athletes swear by it, and for good reason. It is the tried and tested means of equipping our respiratory system and driving our ability to endure arduous work inside the ropes. While you may be surprised to learn that running is not gospel in many MMA fighters’ camps, when it comes to Muay Thai, you will need your roadwork. That is not up for debate.

UFC lightweight champion, Conor McGregor, is perhaps the most high-profile combat sports star who is forthcoming in his belief that road work is not essential. He is also arguably the most premier-level fight star on the planet with poor cardio. Is there a link between his refusal to run and his propensity to gas out in fights? Absolutely.

There is no question that a fighter with poor cardio is at a major disadvantage. As we have seen with McGregor in his two fights against triathlete Nate Diaz – and the glorified boxing exhibition against running-fanatic and boxing icon Floyd Mayweather Jr. – if he can’t finish a fight within the first quarter of the bout, his ability to compete severely diminishes.

This is not a young fighter skipping early morning 5k’s – this is a global superstar who believes that career longevity is directly attributable to not running. Is that logic justified, especially when it comes to Muay Thai, and not MMA? It cannot be proven so.

Can I get away with not running in MMA?

There are many who will argue that you can. McGregor has never had the type of cardio which would see him dominate an opponent over the long course of a fight.

The Irishman has proven, however, that he does possess knock out power which has saved him from being dragged into the trenches. In fact, McGregor has only ever seen the judges’ scorecards twice in his professional career – three rounds against Max Holloway in 2013 and the second Diaz bout, which saw him, ironically, running away from exchanging in order to preserve energy.

When it comes down to it, all things considered, McGregor is a terrible example for any fighter looking to justify skipping road work. “The Notorious” is effectively a knockout artist. Possessing that “touch of death”, as Tri-Star Gym Patriarch Firas Zahabi labeled it, has partly given McGregor the confidence to scrap running from training camps.

For any budding Muay Thai fighter, however, attempting to replicate McGregor’s philosophy will end badly for them. Muay Thai is a sport where the emphasis on cardio – or to be specific, on running – is almost obsessive. There is a reason for this.

Why is running important for Muay Thai fighters? 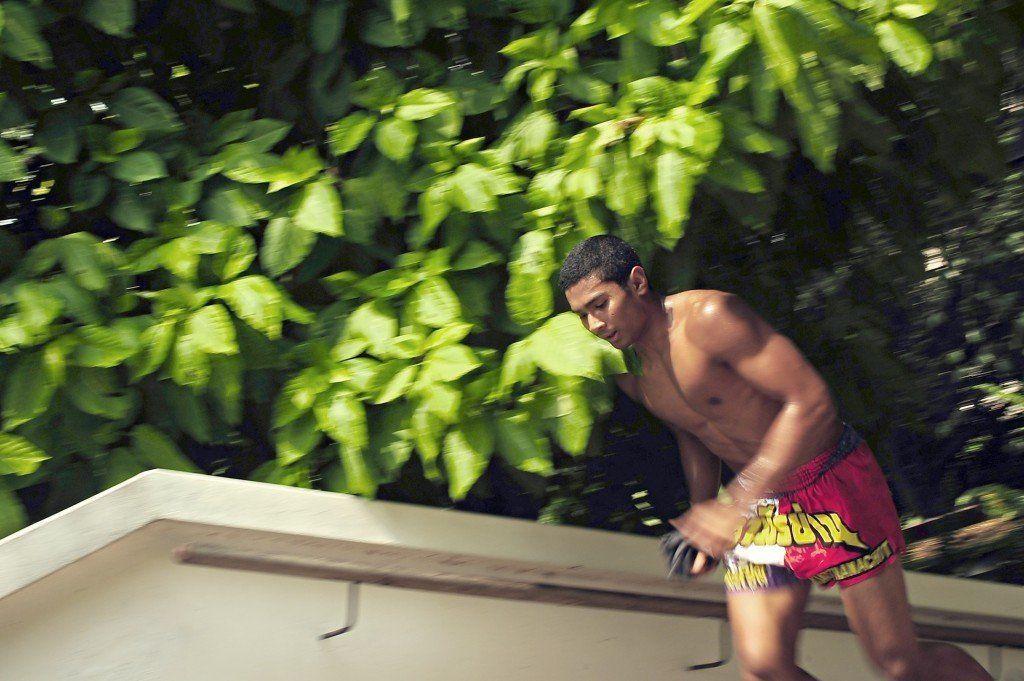 The chances are that – if you have to ask this question – you have never trained in a Muay Thai gym. From absolute beginners to the greatest fighters the sport has ever seen, running has been an integral component in making Muay Thai fighters what they are. This is far from a cliché – it is simply essential for the demands of the sport. It goes further than the physical benefits; as Muay Thai is mentally demanding and taxing, getting those early morning runs in builds character, so it deeply ingrained in the traditional values which make up the fabric of a Nak Muay.

To focus on the physical benefits, however, is to see just how integral it is to a fighter. So what does running do to a fighter’s body?

Simply put, it does a lot. For example, the importance of running in Muay Thai is felt when we train as:

It builds our anaerobic capacity

This means more energy, which is essentially the gas we need as fighters to perform at optimum levels. Muay Thai is a sport where its combatants are among the toughest and best conditioned in any fighting realm. You will need the speed of your actions and reactions to be congruous to the speed of your mind. Gassing out is not an option.

It is essential for good cardio training

When training, we want as much energy as we can get. Running long distances is demanded in Muay Thai, as it gives us the energy we need to train at demanding speeds over long distances. Losing energy is not as easy to do when you have been running as you should be.

It is great for building strength in your legs and shins

You will be using your legs a lot in Muay Thai. From mobility to developing more power in your hips and muscle in your legs, it is no secret that running is held in high regard when it comes to Muay Thai. Running also helps to build one’s bone mineral density which is a major advantage in Muay Thai. That is why running is nothing less than essential.

Getting the most out of your body makes running mandatory among Muay Thai fighters. As the sport is relentlessly quick at times, great conditioning is essential if you plan on doing anything of note in the sport.

When it comes to Muay Thai, running is so deeply ingrained into how fighters prepare that it is almost unquestionable. Even when it comes to 5 round bouts, the emphasis is to be prepared to go 10 or 15, even though this will not be required. Even the most talented Muay Thai fighters will be “exposed” for cutting corners when it comes to running, as it is so noticeable in the gym.

Building a solid anaerobic burst is very important for fighters, given the short bursts when it comes to exchanges. In order to develop a considerable anaerobic base, you will first need to develop a strong aerobic system, and running is important in this regard. One clear advantage of fighters who shun high-intensity workouts in favor of lower-intensity runs is that they tend to perform better in a fighting capacity.

Like with most things, the tried and tested approach is generally the best. When it comes to running for Muay Thai fighters, therefore, you won’t hear of many complaining it is a bad thing.