Here’s How To Increase Your Punching Power 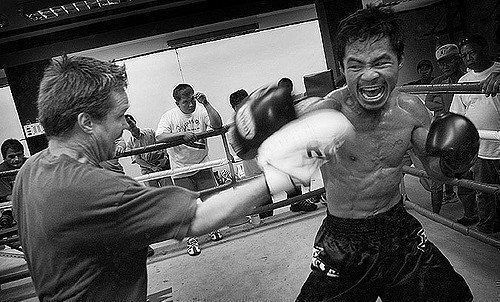 One of the most important aspects of the art of fighting – especially in Muay Thai, Boxing, or MMA – is punching power. Quite simply because, when it comes down to a fight – whether it is on the streets or in the ring or cage – possessing a powerful punch could mean getting out of a life-threatening situation successfully, or having your hand raised by the referee at the end of a sanctioned fight.

Just go on the internet and you’ll find that it is filled with video evidence of this. Bullies in school getting stopped, street fights coming to a screeching halt; all from a single, powerful punch. And in the world of professional fighting, fans have on numerous occasions witnessed even the toughest fighters in the world get knocked out or broken down by heavy-handed opponents.

For this reason, the quest to develop and increase punching power has always been heavily pursued by many, if not all fighters. So how exactly does one increase power?

The Science Behind Punching Power

Before we answer that question, let’s first understand the simple science behind punching power.

The force, or a push or pull of any object, can be measured very simply with Sir Isaac Newton’s most famous equation: F=ma (Force = mass x acceleration). However, in exploring the devastating punches of boxing’s first eight-division world champion, Manny Pacquiao, physicist Dr. Simon Foster of London’s Imperial College explains that fighters should understand the famous force equation in a different form to better understand how power in a punch or any strike for that matter, is generated.

Using two additional equations – P=mv (momentum = mass x velocity) and ∆P = m∆v / ∆t (change in momentum = mass x change in velocity / change in time), Dr. Foster explains that boxers should understand the force in a punch to be equal to the change in momentum (F=∆P). And he translates this further by explaining that “the reason Pacquaio is so devastating is because he can make his opponent’s head move at a really high velocity, and do this in a very short period of time.”

In other words, an effectively heavy punch occurs when a fighter is able to generate as much force as possible, in the shortest amount of time possible. To be able to achieve this consistently, fighters will have to not just develop speed, explosiveness, and effective mass generation through physical conditioning, but also work hard at perfecting their overall technique.

Work On Perfecting Your Technique 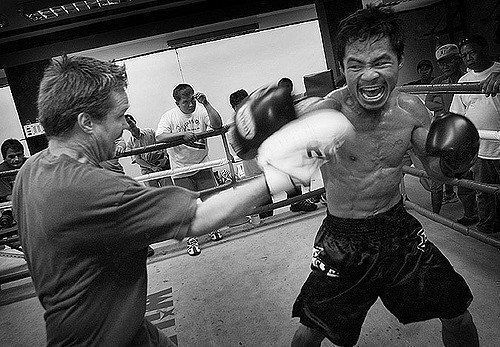 Let’s begin with what the very foundation your punches – whether powerful or not – are built on in the first place: technique. The fundamental purpose of technique is to help fighters execute strikes in the most effective way possible. In this case, that means launching a punch in the quickest way possible while transferring as much of the fighter’s body mass as possible to the target point at the same time.

If there’s anyone that knows a thing or two about power and how technique compliments it, it’s Yodsanan Sityodtong. The man dubbed “Little Tyson” is a WBA Boxing World Champion and one of the most frightening punchers in boxing history with a whopping 47 KOs. He explains the importance of technique in power punching in a very simple way:

“Refining the technique and getting it right is crucial, as it is a good base. A powerful punch is the result of good technique. So focus on what you have control over (the technique).”

Mastering technique will require a ton of hard work, dedication, and patience. Take every opportunity you can during training, and also out of your regular training sessions, to practice your technique. Whether it’s shadowboxing or practicing on a heavy bag or with a partner, be sure to take your time and not rush; execute the techniques slowly and focus on refining every single movement required to the very last detail. This will be highly beneficial regardless of whether you’re just a beginner or an advanced practitioner.

Work On Strengthening Your Core And Lower Body Muscles

Mastering technique sets the foundation for effective execution of your punches; most of the rest comes from having a solid core and strong lower body muscles – mainly your glutes and legs. Having good core and lower body muscles is the key to everything you need in order to enhance the power of your punches – speed, strength, endurance, and most importantly, explosive rotational movement. It works as a good base and support system for your overall physical conditioning as well.

For fighters, a well-built and effective core and lower body doesn’t just come from doing sit-ups or occasional machine work in the gym – it comes from well-picked weight exercises that target every part of the core and lower body from every angle. And these exercises should be done as often as possible as part of your training routine or at the end of your training sessions.

Fighters should ensure that they do core exercises that build the abdominals (front of the torso), oblique’s (side of the torso), and lower back. Some good examples include plank variations that target both the front and side of the torso, the ab roller, dorsal raises, the hollow body hold, oblique crunches, hanging leg raises, bicycle crunches and more.

For the lower body – plyometrics, kettlebell or medicine ball squats, back squats, deadlifts, and sprints are some of the good exercises.

Work On Building Up Your Speed

As we’ve already mentioned, an effectively heavy punch occurs when a fighter is able to generate as much force as possible, in the shortest amount of time possible. So speed undoubtedly plays a huge role in generating a powerful punch. Not only that, it will also help to ensure that your opponent doesn’t see the punch coming – which along with accuracy, is one of the keys to knocking people out.

One of the best ways to build effective speed is to shadowbox – focusing on speed, technique, and turning of the hips and feet at the same time. Investing a large amount of your training time in this will help build in you habits that will translate extremely well into a fight. Other good ways to train up your hand speed is the speed bag, double end speed bag, speed rope, and shadowboxing with dumbbells or a resistance band.

Work On Your Explosive Rotational Movement

Having mastered the technique and increased the overall strength and speed in your punches, your next aim is to enhance those very qualities. The only way to do so is to increase your explosive rotational movement. Having incredible explosive rotational movement will help in the consistent and effective execution of your technique (since most techniques involve turning of the foot and hips). It will also multiply the amount of force transferred from your body and punch to your opponent with full, well-executed rotations, and generate explosiveness to reduce the amount of time needed for your punches to land.

Some good exercises to build your explosive rotational movement include the seated Russian twist with a medicine ball, medicine ball wall throws, twisting knee ups from hanging position, hook swings on the heavy bag, and the standing cable woodchop.

Knowing how to generate good power in all your punches isn’t everything in a fight. There are many other aspects to train in order to even begin landing a punch. These include accuracy and precision, timing, good range and much more. So remember not to focus solely on increasing punching power though it may be highly beneficial; plan your training sessions well so that you cover every aspect required in becoming a well-rounded fighter.

GET YOUR EVOLVE VACATION PASS NOW!