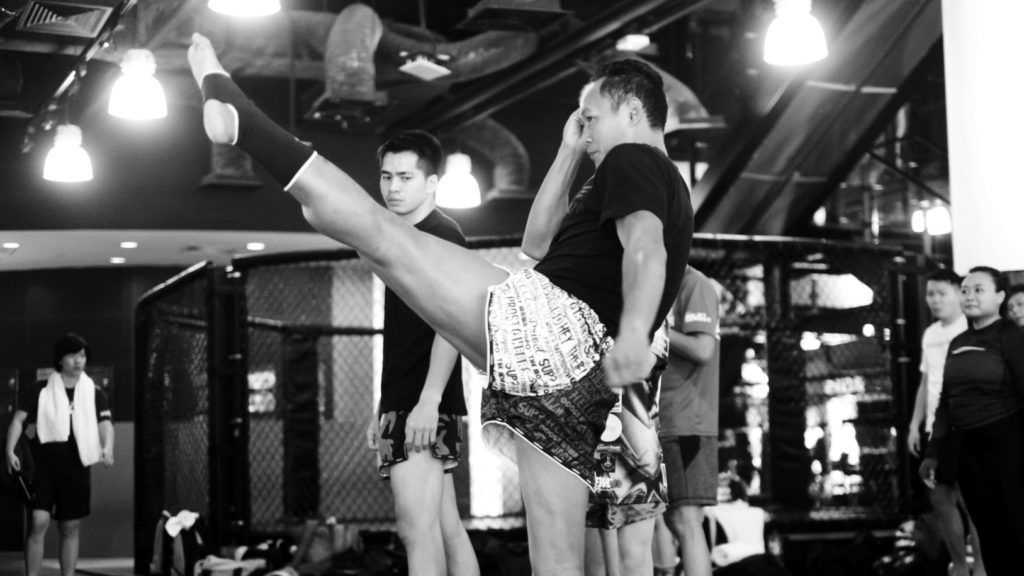 Ask any boxing purist what the most important punch in the sport is, and the response will almost always be the jab.

In Muay Thai, the push kick – known as the teep – is pretty much the equivalent of the jab. While instructors will also place heavy emphasis on their students developing a jab, the difference in Muay Thai is how crucial kicks are. While boxers are limited to punches, there are eight limbs used in this sport, including legs. Legs, rather than fists, are used to control distance, break up attacks, and keep an opponent at bay.

Therefore, the importance of the push kick in Muay Thai is not a secret. It is the one technique which can separate a good fighter from a great. As any Nak Muay will tell you, there is nothing worse than competing against an opponent with a seasoned push kick. A disruptor of attacks and a tool which is as mentally challenging as it is physically, this weapon can prevent any fighter from finding their rhythm and range.

The question is, who did it best? Is there any way to truly answer this question? We’re unsure. However, we decided to take a look at five fighters who excelled with the push kick and will allow you to make up your own mind.

Sometimes a fighter will come along that seems to be miles ahead of his peers.

Somluck Kamsing fit this description perfectly. At an early age, he was identified as being ridiculously talented and was tipped to go very far in the sport. As luck would have it, he was considered almost too good for those betting on the sport to have any interest in seeing him fight.

In fact, his incredible evasive head movement, positioning, and dominance of opponents made him technically superior, which put off those looking for a toe-to-toe spectacle. As such, Somluck – now with 200 fights under his belt at the age of 18 – moved into amateur boxing. He excelled and won an Olympic gold medal.

Although known for his incredible boxing skills, Somluck had a killer of a push kick. A part of what made his defense so impregnable was his ability to prevent fighters from finding range (using the push kick). He was very unpredictable in attack, often using a push kick to draw an opponent in, ironically enough, before countering with a head kick or spinning elbow. If you want to up your push kick game, check out Somluck’s style.

Muay Thai legend Saenchai is one of the most creative fighters in the history of the sport.

If you have ever watched any of his fights, you can see just how much he relies on the push kick in both defense and attack. It is in the latter where we have seen some incredible ingenuity from Saenchai.

Some of his most famous techniques when it comes to the teep are the fake roundhouse to teep and the jumping switch teep. His use of a myriad of different techniques underpins the incredible arsenal of weaponry at his disposal. He is a fighter so blessed with an abundance of gifts and this is apparent by the endless hours of highlight reel footage he has accumulated over the years.

Saenchai has one of the most creative attacking games in Muay Thai history. He is also a fighter who understands the old adage that a better defense leads to a better attack. Additionally, he understands just how important the push kick is in getting there.

Awarded the title as “Fighter of the Century” by King Bhumibol Adulyadej, Apidej was no ordinary fighter.

He is regarded as the hardest kicker in the history of Muay Thai. Although he was an incredibly gifted and dominating fighter, Apidej also understood the importance of the push kick when it came to finding the right range to execute an attack.

While the majority of footage of Apidej will show his superhero-like, show-stopping knockout power, Apidej was one of the finest exponents of the teep. Given that he was in the height of his powers in the 1960’s, there is limited footage of Apidej out there.

Even the “Muhammad Ali of Muay Thai” was a fighter who knew the power of the push kick.

Samart Payakaroon is perhaps the greatest fighter in the history of the sport. He is well regarded for his excellent side teep, which saw him overwhelm some of the greatest fighters in the Golden Era of Muay Thai in the 80’s and 90’s. Many fighters struggled against the master technician, partly down to his incredible accuracy with this kick.

Samart used the kick both as a spear to attack with and a means to prevent fighters from finding their rhythm and working their way into range. Often willingly fighting on the back foot, Samart would use the side teep – which was like a combination of a sidekick and push kick – to exploit a fighter when rushing in.

The all-time great used the kick as a range finder, to disrupt an opponent’s attack, and to create non-linear attacks of his own, often to the befuddlement of the man standing opposite him.

An absolute wizard when it came to controlling distance, Anantasak had one of the most remarkable push kicks in Muay Thai history.

Anantasak’s understanding of space and distance allowed him to use the main currency of measuring both: the jab and the push kick. He was a tricky fighter to figure out, as would constantly set traps with both. A fighter who almost invited opponents into his counter shots, Anantasak would seldom put a foot wrong and seemed to have an unworldly ability to fight in patterns while keeping them indecipherable.

His high fight IQ, muscle memory, and ability to analyze an opponent’s lines and patterns meant that he would make his control of distance look too easy. He would use a jab to set up a teep or vice versa, confusing fighters and making it nigh impossible to predict subsequent attacks. Anantasak was, quite simply, a master of this skill and highlights why the push kick is so important.