How To Combat A Ground And Pound Specialist In MMA In mixed martial arts (MMA), ground and pound is an important aspect of the sport. Throughout the brief history of MMA, this method has been used by a number of fighters en route to important victories.

Unlike many other organized combat sports, MMA requires fighters to be adept in a stand-up (striking) and a ground (grappling) game. On the feet, various techniques are combined in an exchange of strikes. Muay Thai, boxing, taekwondo, kickboxing, and other notable striking disciplines are combined for this purpose.

On the ground, fighters will use techniques from Brazilian Jiu-Jitsu (BJJ), wrestling, sambo, and other grappling sports to get the upper hand. While most traditional grappling sports do not permit strikes, MMA does. This gives the sport a unique edge. Fighters who are exceptional in BJJ, for example, will have to factor strikes on the ground into their game – something which they would not be used to in BJJ competition.

Which Fighters Are More Likely To Use Ground And Pound?

Ground and pound is a style which is credited to former UFC heavyweight champion and Hall of Famer, Mark Coleman.

Coleman, who had a strong wrestling background, is essentially considered the “Godfather” of ground and pound. “G&P” was significantly more brutal back then that it is now. In 1996, when Coleman first joined the promotion, rules were limited. If you got a fighter to the ground, you could land hammer fists, elbows (including the now outlawed 12-6 variety) and even head butts.

These days, fighters are more all-rounded, skill-wise. For Coleman, he was limited in the sense that he was simply an excellent wrestler who could pack a mean punch. Despite the differences in the era, fighters who rely on power tend to opt for a ground and pound approach. Those who have strong wrestling bases and – like Coleman – are more inclined to inflict a beat down on their opponent’s face rather than take their back.

Setting Up Ground And Pound

In order to get a fighter into the right position, a ground and pound practitioner must first establish dominance. The ground and pounder will ideally want full mount, but positions like the side mounted crucifix also allow them to get some heavy shots in.

In order to do this, there are 3 aspects to check off:

Almost every single fighter on the planet is the same when it comes to the anatomy. We have a head, a torso, two arms, two legs, and joints. Our movement is determined by our design. As such, there are ways which a fighter can immobilize his opponent by understanding the basic function of the anatomy.

When setting up ground and pound, fighters will look to control your arms, hips, and head in order to rain down blows. In BJJ, for example, we learn about how a restriction of head movement makes for limited hip movement. The spine is crucial to a human’s mobility, so controlling the two most important areas (the neck and the hips) allows a fighter to trap another.

Controlling the arms is massively important to a ground and pound fighter. If they can establish dominance here, they take away the ability to defend and attack from the ground. Once a fighter is on his back and trapped, the dominant opponent can punch and elbow his way towards victory.

How To Defend Against Ground And Pound 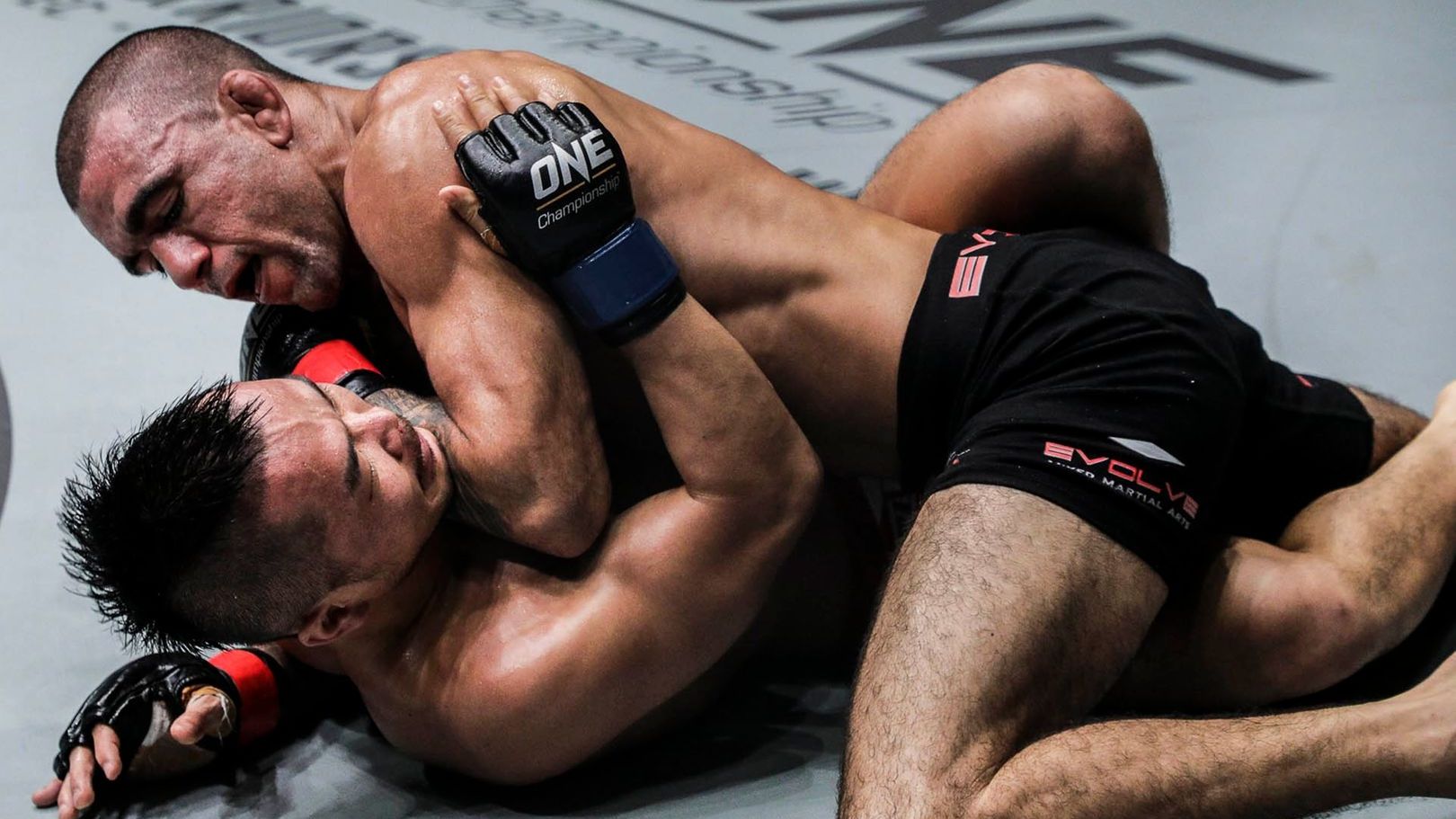 The most effective way to defend against a ground and pound fighter would be to keep the fight off the floor. That is unless you are aiming for a submission and are happy to shoot for takedowns on your terms.

What a fighter does not want to do is have a ground and pound specialist beating the breaks off him throughout the course of a fight. It can take just one solid elbow or punch from the dominant position to knock a fighter unconscious, so knowing how to defend yourself in uncompromising positions is crucial.

In basic terms, defending against a fighter who has the dominant position depends on a number of things. The ground game in MMA is so refined these days that it is easy for a fighter proficient in BJJ to use ground and pound in order for you to give up your back. This is a common trick.

Against a fighter that wants to simply land blows, the bodily position is key. First and foremost, you need to remain calm, which will prevent the ground and pound fighter from working his way into a position to land shots.

There are a number of factors which can determine how you defend against ground and pound.

You should always consider the opponent’s skill-set, and work from there. For example, is the fighter currently trying to get into a position to end a fight via ground and pound, or using shots to get inside your guard to submit you?

If you believe it is the latter, then your submission defense better be on point. For the former, you know that he is simply trying to do his absolute best to create the opening to punish you with punches and elbows.

Depending on your skill set, this either scenario could be something that you can use to your advantage.

If you are comfortable on the floor, you may have no real worries about being submitted. With a strong background in BJJ, you are happy to give the false impression of vulnerability to your opponent, allowing him to tire himself out before you lock in an armbar, for example. In this case, head and arm control, the rubber guard or butterfly guard, and a lot of clinching will work wonders.

If you are not as proficient on the ground, keeping your opponent out may be the best option. To do this, try to keep your feet on your opponent’s hips. If your opponent gets to his feet, be prepared to throw up kicks, but be prepared for dropping elbows. Up kicks usually keep a ground and pound fighter’s shots at bay, but you will likely take some leg kicks in exchange.

When it comes to an opponent getting himself into a position to ground and pound you into another time zone, he needs compliance. In other words, if you are happy to block heavy shots with your pretty face, just let him do his thing. If you have a date the night after a bout, you may want to think about your defense.

In basic terms, ground and pound is as brutal as it gets. If one fighter is working his way into the position to land shots, the first thing you want to do is stop him on his way. Unlike in a street fight – where your opponent can use his fists, elbows, and head from the top, MMA has rules. Your opponent will have his fists and elbows — it is up to you to soften the blows.

The ground and pound fighter needs space and leverage to land shots. Holding on to his arms, or wrapping them up, will blanket these shots and take the sting out of each one.

If you find yourself in a slightly dangerous position, tying up your opponent up will nullify the exchange. The referee will then step in and separate you from your opponent. Knowing how to remain calm and prevent your opponent from establishing that control will help keep you safe until the final bell.