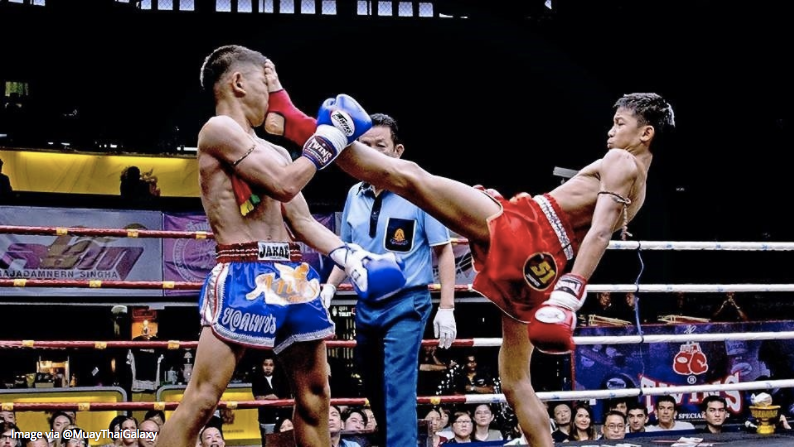 This is especially the case among non-Thai Muay Thai practitioners. However, if you have had the chance of facing a fighter with a good teep before, then you will know how incredibly beneficial and powerful the teep can actually be.

The teep can not only enhance your over offensive and defensive capabilities, it can also play a huge part in breaking your opponent down mentally. And this is why fighters throughout history who have an exceptional knowledge of the teep excel tremendously in the ring not just in attacking and defending, but also in their entire posture of confidence.

Today, we will take a look at the different types of teeps used in Muay Thai. Being familiar with the different variations the teep will no doubt help you better understand the power, effect, and versatility of this incredible technique.

No doubt the most basic of the teeps is the front/straight teep. This is the teep most commonly used for both defense and offense. The mechanics of the technique and also the use of it, however, varies depending on whether it is executed with the lead leg or rear leg. But as it is with almost all of the other types of teeps, and regardless of which leg you are using for the front/straight teep, the technique is incredibly effective both offensively and defensively.

Many experts and fans of Muay Thai often compare the lead leg front/straight teep to the jab because of its simplicity and its general function both offensively and defensively in a fight. However, it goes without saying that the lead leg teep has a lot more damage and impact potential than a jab. When done at the right moment, with the right technique, and at the right target area – any variation of the teep can send your opponent flying as far as the ring will allow him/her; and the front/straight teep, though simple, is no exception.

The lead leg front/straight teep is quickest of all the teeps. This is most likely because unlike the lead leg roundhouse kick or knee strike, there is no switch involved in the execution of the technique. Without the extra movement involved in switching, it can sometimes be incredibly difficult to read or see the lead leg teep coming. And having a technique that is difficult for any opponent to see coming will no doubt be extremely beneficial for your entire Muay Thai arsenal.

As mentioned, the biggest advantage of this technique comes from its ability to be quick and sharp – the omission of the switch in the technique allows for this. However, the lack of the switch to pull the leg back also removes the possibility of having extra momentum, which makes it difficult to generate force in a lead leg front/straight teep.

This is why it is important to always execute this type of teep with the right technique. The right technique requires its user to shuffle slightly or even take a quick full step forward with the grounded rear foot. This simple step is crucial in pulling off the front/straight teep successfully and with full effect.

With the slight shuffle or step, the momentum generated from the movement and weight of your body come together as a singular force and is channeled entirely into your lead leg teep. This small adjustment also allows you to cover a lot more distance, which means you have the option of launching this technique from a longer range.

It is also important to note that the lead leg front teep can also be done without the step from the rear leg. This basic method of using the front teep can be used as a quick defensive strike. This is perhaps most commonly seen in almost every Muay Thai match; fighters throwing sharp, short teeps to the thigh or knees of their opponents to hinder advances or kicks.

Other than the huge amount of explosive power it generates, one of the most significant advantages of the rear leg teep comes from the fact that it can be hidden behind a rear leg roundhouse feint. The roundhouse feint causes your opponent to focus his energy towards his side to defend against the incoming kick, which opens up his center and balance for a rear leg front teep to land easily, and effectively. Landing this successfully will help you score significantly on the judges’ scorecards.

2. The Side Push Kick

The teep with the best speed to power ratio is without question the side teep. This version of the teep is best and most commonly executed from the lead leg. But compared to the lead leg front teep, the side teep has more range potential due to the body mechanics in executing this teep. Samart Payakaroon (above) – arguably the greatest Muay Thai fighter to ever live – was a master at this particular type of teep, and he used it to dominate even some of the very best fighters of his era.

The technique requires you to turn your hips just enough that your knee cap is now pointing sideways as your leg is straightened and extended instead of the knee cap facing upwards like in a regular front teep. This body position and form opens up hip, allowing you to stretch the kicking leg parallel to the ground and further from the grounded leg – which is why the range potential of this kick is greater than that of a front teep. The form created by the technique also allows you to channel more weight and force into the teep.

Mastering this teep will no doubt help you tremendously in the aspect of range and distance control in a fight – making you extremely difficult and frustrating to fight against.

Like all other jumping variations of basic striking techniques, the jumping switch teep is the flashiest and has the potential to generate to most power and impact of all the teeps. The extra leap or jump also allows the user to cover a great amount of distance in the ring. The switch movement involved in the jump can also act as a feint to mislead to the opponent to react in a brief moment of panic to the switching leg so that the teep can land with greater ease.

The slapping teep is another teep that is rarely used in the ring. This teep works very much like a high foot stomp as it requires the user to raise his/her knee and leg up high enough to land the entire sole of the feet on the chest, shoulders, or even face of the opponent. The force of the teep comes from the stomping or slapping motion as the user extends the leg at the point where the knees have been lifted as high as possible facing upwards.

This teep is usually most effective as a counter to an opponent’s punches or when he/she is advancing in. For example, if the opponent has been consistently throwing good jabs or crosses, a good slapping teep to the chest or shoulder near the arm that is punching can completely stop the punch in its tracks and even cause a numbing sensation to the targeted area.