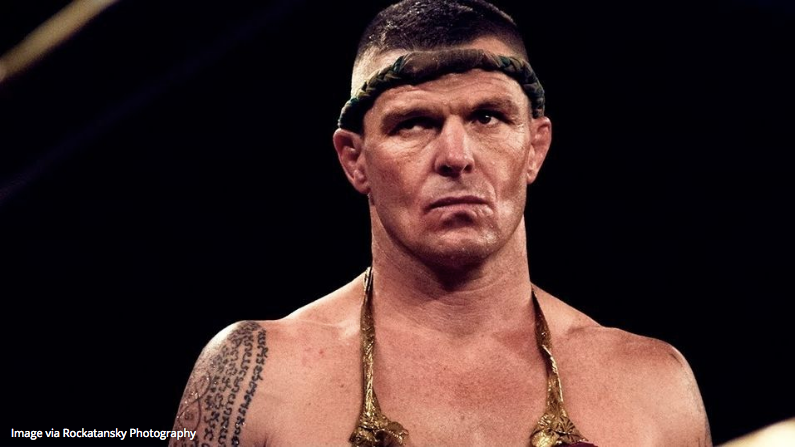 Before he had adopted the moniker “The Gunslinger,” John Wayne Parr (born Wayne Parr) stood out as a talented young Taekwondo fighter. Having made the choice to move into Muay Thai, Parr had his first bout at aged 14 and was hooked. Three years later, Parr had won his first title in the sport – and spurred on by a love of the Jean-Claude Van Damme movie “Kick Boxer” – Parr accepted an offer to train in Thailand.

In 2018, the 41-year-old is regarded as a true legend of the sport. Having effectively lived among Thai fighters in a Muay Thai camp for four years, Parr trained in Pattaya and Bangkok, endearing himself to the Thai public due to his relentlessness and incredible heart. It was not just in the ring where the Australian would exhibit the heart which would lead to him being voted Best Farang Fighter in 1997. Parr became a 10-time world Muay Thai champion, and currently holds a record of 132 fights, 99 wins, and 45 knockouts.

“I moved to Thailand 1996 as a 19-year-old,” Parr said. Parr initially trained in Pattaya before moving to Bangkok.

“My Thai sponsor in Australia, Richard, became friends with [legendary Muay Thai fighter] Sangtiennoi. Soon they came and picked me up, and I moved to Bangkok. Now things got serious training 3 hours in the morning, 3.5 hours at night, and sometimes 7 days a week. It was 5-minute rounds on the pads with 10 kicks from both legs at the start of the round, middle of the round, and the last 30 seconds. Every kick in between had to be a double. It was very tough in the heat, but I learned to adapt.”

Parr did more to adapt, despite living in a foreign country and not understanding the local language.

Was there any point in your career where you seriously considered giving up?

“Yes, of course. I wouldn’t see another westerner for months at a time, and nobody could speak English,” Parr said. “Training beside the Thais, you want to train just as hard, but not being used to the heat and the work rate, it was difficult to keep up at first and was very disheartening. But, eventually, you make adjustments, and you slowly become a white Thai.”

Parr refused to give up, but there were times when an observational nature came in particularly beneficial. Given his surroundings in the absolute epicenter of Muay Thai, there were lessons to be learned every day. Sometimes, these lessons even came from the crowd.

What was the best advice you ever had in your career, and who gave it to you?

“It wasn’t so much advice, more so an observation,” he said. “After watching so many fights and seeing how the crowd reacted, I noticed the fans went crazy when it was balls to the wall excitement instead of playing the game trying to be technical. I thought to myself, people want to be entertained, and the only way to do that is to be ferocious.”

“The afternoon consisted of 30 minutes of skipping, a few rounds of shadow, depending on how close the fight was, 3-5 five minute rounds on Thai pads with 10 kicks each leg at the start, middle, and last 30 seconds of each round, with every kick in the middle being a double. 3 rounds of focus mitts, 25-30 rounds on the bag, then 30 minutes clinch. Then 50 kicks and 300 knees on the bag, in addition to 200 sit-ups.”

Parr integrated himself into the Thai culture, and it was clear after some time that he was being embraced for his efforts. Despite being Australian, he picked up on many of the subtle cultural differences. For example, the Thai people are renowned for being particularly spiritual, and Parr had some interesting experiences while in the country.

Can you tell me about the ghost experiences in Thailand?

“Yes. I remember being asleep but almost that awake feeling. I felt pressure on my chest, and I wanted to wake up, scream, or do anything to stop feeling trapped. After what seemed like forever I eventually woke up putting it down to a bad dream. The next day I told my trainers about what happened, and they casually said ‘oh, that’s just a P-Um. It’s just a ghost sitting on your chest. After that, I would get attacked about 3-4 times a week for 4 years. It was always so scary every time. I’m happy to be in Australia where I haven’t been attacked since.”

Parr’s career has been one which has been so colorful and guaranteed to keep him happy throughout the rest of his days. He is not done yet, however, not by any means. Looking back, the Australian legend learned that – in the fight game – less can be a whole lot more.

If you could go back to around the time of your first fight, what would you do differently in your approach?

“Keep it basic. I watched too many movies looking for too many flashy kicks. Strong basics win fights.”

Simplicity does not have to be interchangeable with a basic style, however. Parr’s ‘favorite fighter’ is a testament to this rule.

“My favorite fighter when I lived in Thailand was Namkabuan. His fight name was the ‘Ring Genius’ as his fight IQ was so good he always had to fight guys heavier to make for an even match.”

There is no doubting Parr’s fight IQ. His longevity sums up just how special the Australian fighter is.