How To Combat A Taller Fighter In Boxing 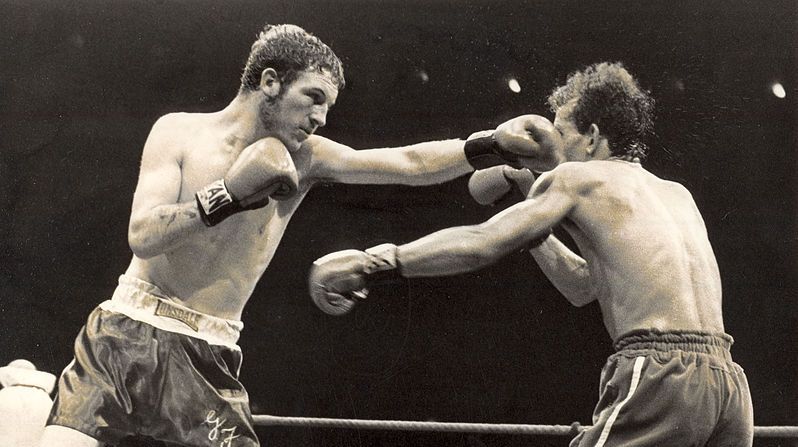 A taller fighter can pose a whole heap of problems for boxers who are not as blessed in the height department. It is almost certain that a fighter of an average height will come up against a taller fighter at some point, so formulating a plan to tackle a taller fighter will be something you and your coach can work on even before this happens.

Quite simply, it generally comes down to their reach. Taller fighters typically have a longer reach, which makes it difficult to get inside and score. The enhanced reach many taller fighters enjoy also makes it easier for them to establish striking range. Many fighters blessed with taller statures and longer arms, therefore, adopt a style based almost exclusively on holding their opponents off with a solid jab and landing straight shots from behind it.

When fighting a taller fighter with a longer reach, it can often feel like battling an opponent who is almost standing on a hill. The main advantage to his reach is that he can land quicker, and cut angles much faster following a successful punch. This, of course, makes things difficult for a shorter fighter. If a taller opponent is in any way aware of the perks he holds in this department – and he more than certainly will be – it could spell for a long and frustrating night. That is unless you use his strongest attributes against them.

Rather than staying on the outside and waiting for your opening, it is almost always a better option to bring the fight to the taller opponent. Simply sitting back and allowing the rangier fighter to pick you off with jabs and straights will rarely end well. The key to beating a fighter who bosses the height department is to get inside and keep the fight there, for as long as possible.

It sounds so easy: get inside and bring the fight to them. In reality, things will be a lot trickier. A shorter fighter will invariably have to deal with both the offense and defense of a taller boxer to get within range to attack. Expect to take shots, be pushed back, tied up, hit on the way out and be forced to move in from a reset position to have any chance of being in a position to land a shot.

Employing lateral movement and feints are also important to getting inside and within range to land. Doubling up the jab, mixing in feints, and demonstrating unpredictability and variety in punches thrown, for example, can confuse the taller fighter, who may be waiting to establish a platform to counter off. Shorter steps forward also help.

A shorter fighter will also find it easier to get inside a taller fighter who is trapped in a corner, or against the ropes. This can negate their ability to take advantage of their reach, and land step-back counter punches, too. Their ability to defend against the hooks, uppercuts and close range attacks of fighters who are smaller in stature also decreases from this position of vulnerability.

Getting Inside a Taller Fighter Using Pressure

A shorter fighter will invariably need to close the distance against a taller fighter. Luckily, there are some tried and tested ways of getting close enough to land on a fighter with a height and reach advantage. This is not to say that these are foolproof blueprints by any means, and many of these techniques will need some form of modification to work, depending on the opponent.

Aim to con the taller opponent into throwing a jab, from there you can either move under it or slip to the side and counter. Your aim should be to approach your opponent, either directly or from a narrow-angle, and move under the lead punch and attack the body. Once inside, you have the opportunity to take away your opponent’s legs with body shots.

A fighter who was known for his ability to neutralize taller opponents’ reach and height advantages was heavyweight legend, Mike Tyson. “Iron Mike” would aggressively pressurize opponents into making errors to get inside and cause damage with hooks and uppercuts. In the example below, watch how the 5’ 10” Tyson worked his way inside the 6’ 5” Tyrell Biggs, often using this technique, and variations of it.

A key aspect of Tyson’s technique was his exceptional head movement and peek-a-boo defense, which allowed him to bob, weave, and slip his opponent’s punches to create ways inside.


Combating a Taller but Aggressive Fighter

Another example of how a shorter fighter can overcome the height advantages of his opponent is by a sound understanding the importance of distance. Floyd Mayweather Jr. was a master of creating the illusion of a shorter distance between him and his opponent. In his masterclass against the late Diego Corrales in 2001, Mayweather faced a much taller and more aggressive opponent.

One aspect of how Mayweather baited Corrales forward was by creating the illusion that he was closer than he actually was. Mayweather’s technique was to allow his head to sit over his lead leg, which invited his opponent to throw a shot, before pulling back. As the defensive master had effectively conned Corrales into believing he was within range – only for his opponent to find out too late that he had, in fact, overextended – Mayweather could then land a counter punch and move out of range.

For any smaller but faster fighter looking to find a way to deal with a taller opponent who moves forward frequently, this fight is essential viewing.

Things to Remember When Dealing With a Taller Opponent

The ultimate goal is to create the distance from which to land. A fighter’s methods will vary depending on the style of the taller fighter. What is generally standard practice is that a smaller fighter with a shorter reach will have to snake his way past the guard of the boxer with the height advantage.

Overhands, hooks, and uppercuts can only be thrown once the distance is right, so the aim is to keep the opponent guessing, off-balance and disrupted as possible until an opening is created.