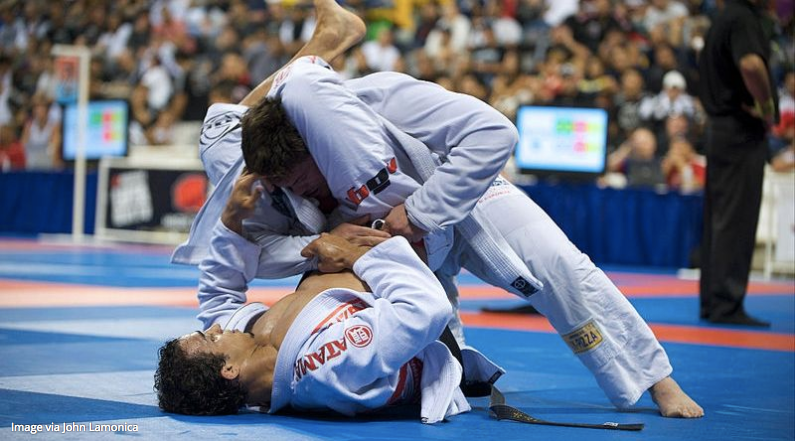 The triangle choke’s multiple applications make it an extremely effective technique for both competition and self-defense. Below are a series of concepts that are applicable to most triangle variations.

The first step of most versions of the triangle choke begins with control of the opponent’s wrists. In a closed guard situation, control of the wrists serves a variety of purposes. For one, it prevents the opponent from securing grips of his own, which is ordinarily his first step to opening the guard and initiating a passing sequence. Second, wrist control prevents the opponent from throwing strikes in an MMA or self-defense scenario. As long as the opponent’s arms are secured, he cannot mount an attack. Finally, control of the wrists enables the attacking student to initiate the next step of the submission, described below.

The triangle choke utilizes the opponent’s arm and the bottom student’s legs to put pressure on the neck of the top player. This pressure impedes the flow of blood through the opponent’s carotid arteries, forcing him to tap out. However, in order to achieve this arm/leg combination, one of the top student’s arms must be isolated. This is usually achieved via the wrist control described above. Once wrist control is achieved, one arm is pressed into the opponent’s torso as the other is pulled forward. This places the top student in the one arm in/one arm out position, which is the ideal position for attacking the triangle choke. It is for this reason that beginner BJJ students are usually taught to keep both arms close to their bodies when stuck in an opponent’s closed guard.

3) Explode with the hips and lock the triangle

Once the opponent is placed in the one arm in/one arm out position, the attacking student must open his closed guard momentarily and explode the hips upward. This explosive movement achieves two things: 1) it catches the opponent off guard, and 2) it limits the amount of space between the attacking student’s hips and his opponent’s neck. At the peak of this movement, the attacking student should lock his or her legs, placing one leg over the shoulder of the arm that is pressed against the opponent’s torso while positioning the other leg under the opponent’s opposite shoulder. Bear in mind that while certain triangle submissions, such as the mounted triangle choke, will not involve this explosive, upward movement, the other principles discussed above will generally remain the same.

Nearly all closed guard submissions require that the posture be broken, as poor posture weakens the opponent and leaves him vulnerable to attack. Therefore, when attempting a triangle from the closed guard, the opponent’s posture must be controlled. This is typically achieved by both pulling forward with the legs and using the hands to pull down on the opponent’s head. Remember, if control is not maintained and the opponent regains an upright posture, his chances of escaping the position are greatly increased.

As with most submissions, the attainment of a proper angle is paramount. With the triangle choke from closed guard, an angle perpendicular to the opponent is ideal. An effective way of achieving a desirable angle from the closed guard position is to step on the opponent’s opposite hip in order to shift one’s body into the desired position. However, as this involves unlocking the legs, it is imperative that an alternative method of control be momentarily employed. This is typically achieved by grasping the shin behind the opponent’s neck and pulling down while shifting the body sideways. Upon completing this movement, one side of the opponent’s face should be directly in the attacking student’s line of sight. For mounted triangles, achieving an angle is usually unnecessary due to the immense amount of pressure created by the attacking student’s body weight.

Several actions are required to finish a triangle choke. For one, if the legs were temporarily opened to achieve an angle, they must be relocked. This is achieved by placing the top side of the ankle of the leg that is behind the opponent’s neck under the knee of the opposite leg. Once the legs have been relocked, the attacking student should make sure that the opponent’s trapped arm is positioned across his body. While it’s possible to finish the triangle choke without placing the arm in this position, allowing the opponent to keep the trapped arm by his side presents him with escape opportunities and makes the submission more difficult to complete. Therefore, it’s generally advisable to position the arm across his torso. If the opponent resists by squeezing his elbow against his side, a slight hip bridge is generally all that is required to dislodge and expose the arm. With the arm in position and legs locked, the attacking student should then squeeze his legs together and pull down on the opponent’s head. This creates an immense amount of pressure on the opponent’s neck, and it will almost certainly result in a tap.

How many of these concepts do you currently incorporate into your training? Whether you’re a veteran grappler or a fresh white belt, keep these tips in mind during your next training session, and you’ll be well on your way to triangle mastery!