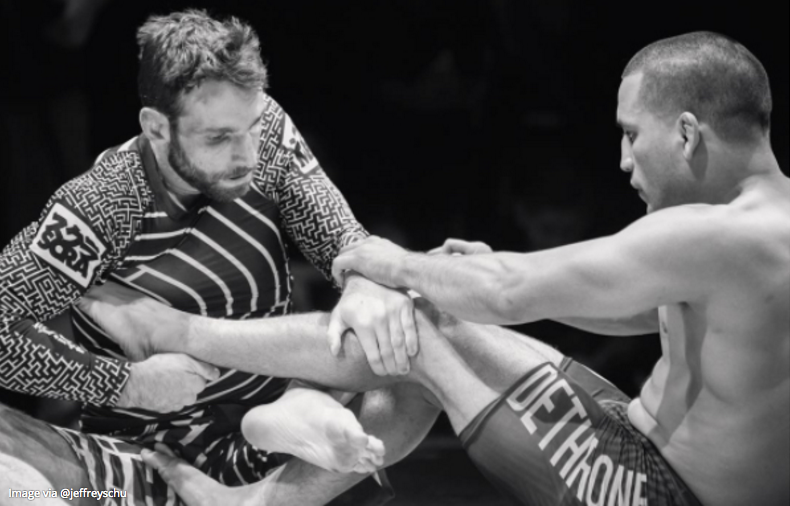 Often times, you will hear a person say someone has great leg locks but cannot pass someone’s guard if their life depended on it. Or you may even hear someone say a person has great guard passing, but their leg locks are horrible. Two schools of thought emerge – the leg locks first school and the guard pass school.

The leg locks first school places emphasis on leg locks as some of the most essential techniques for Brazilian Jiu-Jitsu. In the process of mastering leg locks, you also learn that sometimes going after the opponent’s legs will force the opponent to retract their legs, thus making it easier to pass the guard.

On the flip side, the guard pass school pushes the mantra that passing your opponent’s guard is necessary and fundamental knowledge every Jiu-Jitsu practitioner should have. Knowing how to pass your opponent’s guard, to get to a more dominant position such as side control or mount, becomes paramount, especially in the mixed martial arts (MMA) realm, where strikes are allowed.

So, should you learn leg locks or how to pass the guard? Before we attempt to answer this question, let’s review 5 leg locks that often occur when passing your opponent’s guard.

In Jiu-Jitsu, when you are in your opponent’s closed guard, typically, you must open their guard in order to mount any sort of attack. A standard guard break will open your opponent’s guard, if even momentarily. Your opponent will retract their legs to escape or play some sort of open guard, say butterfly guard.

If you are able to overhook one of your opponent’s legs during their retreat, you can fall to your side with that leg. Completing the submission requires you to isolate their Achilles tendon and apply upward pressure using your forearm at the tendon. Thrusting your hips towards the back of your opponent’s knee provides extra force to secure the submission.

2) Heel hook off the open guard

Lock your opponent’s leg by controlling the movement of their knee. Complete the heel hook by gable gripping your hands around the heel of your opponent’s controlled leg. Twisting the heel into your opponent generates torque at the ankle and then on up to the knee.

As your opponents start to become more familiar with the open guard, it will become more and more difficult to pass their guard. One popular guard that many practitioners are using today is the reverse De La Riva guard – a great guard to use in order to control your opponent’s distance while still establishing some sort of a clinch with their feet and hand.

When your opponent plays the reverse De La Riva guard, their top-side foot rests on your hip bone, while their bottom-side foot is wrapped around your thigh. Both feet are used for distance control- the top foot to push you away, and the bottom foot to pull you in.

Using the fact that the top-most foot will be resting on your hip, force a passing situation where your opponent commits to the reverse De La Riva. The moment the foot comes to the hip, you can overhook that leg with the same-side forearm, at the blade. Finishing the Estima lock submission requires you to cover your opponent’s foot with your stomach, forming a rear naked choke with your arms, and stepping in and squatting over your opponent’s bottom leg, while you squeeze the rear naked choke.

When you try to pass your opponent’s guard, another guard they may play in close quarters is the z-guard, also known as the 93 guard. Their bottom leg is wrapped around your leg closest to them, while the top leg creates a barrier between you and them, using their shin as a shield.

When leg locks are fair game, it’s automatic to grab their top side foot with your hand closest to them. Forming a figure-four grip with your opponent’s foot and both of your hands, you are able to twist their ankle, thereby hyperextending it with immense torque.

5) Half guard to knee bar

When you are pressure passing your opponent’s guard, one final guard they may play is the half guard. Your opponent, when playing this guard, is essentially triangling their legs around one of your legs, so as to prevent you from passing guard.

If passing the guard from half guard proves to be difficult, you can give your opponent a surprise leg lock by scooping their outside leg and stepping over their body, falling back from the knee bar. To finish this submission, position your opponent’s knee on your belly and pull their leg at their Achilles tendon for maximum leverage while thrusting your hips forward to apply pressure against their knee.

Alas, we revisit the question, “should you learn leg locks or guard passing?”. Why not learn both at the same time? You need to know how to pass someone’s guard, and you should know leg locks, in order to be a complete grappler. Having more weapons in your arsenal with leg locks, or knowing how to establish and keep control with guard passing will only help to improve your overall game. Being able to recognize a leg lock opportunity in your guard passing will force your opponent to retract their legs so as to avoid their legs being attacked, thereby allowing you to pass with ease.