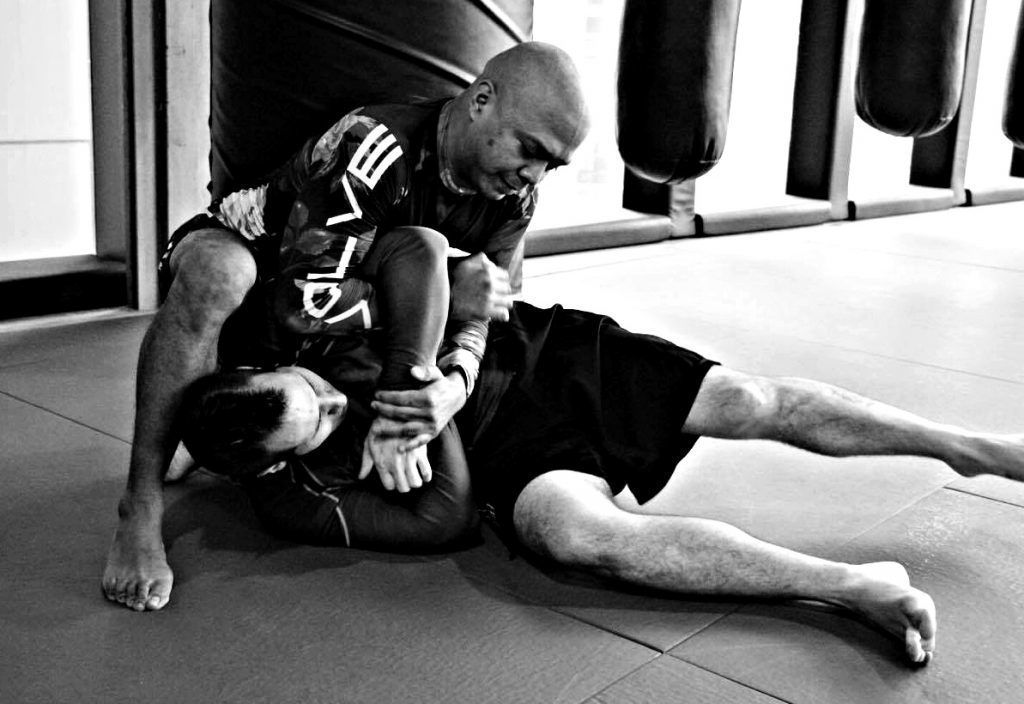 As an instructor, “Slick” Rick believes that keeping an open mind is one of the most important lessons he could impart to his students. He believes that listening, experimenting and learning from one another is the best way to improve as a martial artist.

I grew up in Southern California, a place where mountains, beaches, the desert, and city life are all within a couple of hours from each other. My dad was a US Marine, while my mom had a lot of odd jobs. For ten years, I was the youngest child of four siblings. I was influenced by their influences. I listened to the music they liked, and took the classes they took in school, I dressed how they dressed, or watched the movies and sitcoms that they watched. When I was around 8 years old, my dad enrolled my siblings and me in a karate class. This was probably a direct reaction to the martial arts explosion that came out of the 70’s and into the 80’s. Everyone was enthused with Bruce Lee and Chuck Norris in those days. Outside of watching the classic karate movies, this karate class would be my first taste of martial arts. I don’t remember much from that class, except ich, ni, sun, chi, go, ruth – I think those are the correct numbers we yelled while performing a basic kata.

The influences were abundant in Southern California. Music, dancing, cars, art, neighborhoods of all different ethnicities, sports, nature, technology, and street sports – there was always so much to experience. Naturally, I tried everything from baseball, football, basketball, breakdancing, BMX, to skateboarding. With its unique MMA and no-gi Brazilian Jiu-Jitsu system, 10th Planet is heralded today for being at the cutting edge of no-gi grappling.

While attending college, I had always worked full time. I ended up with three degrees, a Bachelor’s and Master’s in Computer Science, as well as an MBA. Having finally graduated from college I had to make a decision about what to occupy this new found spare time with. Literally, I had no idea what else to do besides the usual stuff I had been doing growing up in Southern California. I thought about jiu-jitsu and getting into shape, so I enrolled myself in a BJJ academy.

Eventually, I found an MMA school that had BJJ, grappling, MMA and Muay Thai. It was then that I became truly excited about martial arts. At first, however, I wasn’t progressing much because I was only training once a week. Eventually, I learned that I had to train more in order to see the bigger picture.

The more I trained, the more hooked I got. I was losing weight and feeling good, all while learning to defend myself. I loved the chess aspect of grappling and of course, the exercise aspect of it. Grappling to me was a paradigm shift from the “lift weights and get bulky” mentality. Lifting weights doesn’t teach you how to defend yourself, but with jiu-jitsu, it was an added bonus. Rick Marshall is a 10th Planet Jiu-Jitsu black belt and one of its most senior practitioners and respected figures.

As a math tutor in high school and college, I helped my friends learn math in such a way that was more understandable for them. It was a game for me to get others to be able to break down a big problem into a series of small steps in order to realize the solution. Because of this, teaching Jiu-Jitsu comes naturally- same game, different subject. I know not to walk away from students when they are having a difficult time learning a technique. Jiu-Jitsu is about progression. By breaking down a Jiu-Jitsu system into smaller steps, we can all practice kaizen.

As the first 10th Planet Jiu-Jitsu instructor in Southeast Asia, I am honored to represent Eddie and share all that I’ve learned with all the students. I also want my students to understand the importance of keeping an open mind. We are all learning and we must look to everyone for inspiration and improvement on our own techniques. Being open minded is one of the most important lessons you’ll learn as a 10th Planet Jiu-Jitsu student. The more you train 10th Planet Jiu-Jitsu, you’ll see how much your no-gi grappling game will change. You’ll learn to adapt the different styles of jiu-jitsu into your repertoire, which would help you evolve into the best grappler you could be.

10th Planet Jiu-Jitsu is a no-gi form of jiu-jitsu conceptualized by Eddie Bravo. It was designed to focus on ground fighting without the kimono or gi. Where other systems put a lot of emphasis on the gi and grabbing cloth for control, a 10th planet practitioner will focus on clinching and overhooks.

The system works really well for MMA practitioners, as most, if not all, rulesets state that a fighter is not allowed to grab the other fighter’s shorts, shirts and gloves.

What you can expect to learn in a 10th Planet Jiu-Jitsu class:

You’ll learn 10th Planet Jiu-Jitsu signature techniques such as the rubber guard, lockdown, twister side control, the truck, electric chair sweeps and submissions, such as the twister among many others. These are the core set or active set of techniques that everyone in 10th Planet should or will know. As a student, your goal is to always improve upon this core set while including other techniques from other systems such as a Brazilian Jiu-Jitsu to improve your overall no-gi grappling game.